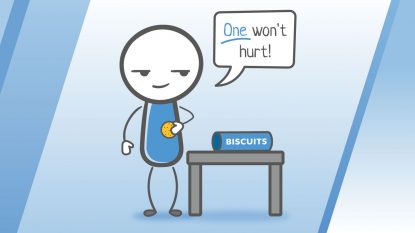 Just one won’t hurt or I’ll just have one …… are two of the biggest dieting lies!

How many times have we told ourselves one of those lies, and then gone on to have more than one – or even finished the packet – only to regret the behaviour.

On some level we recognise they are lies, because we have repeated that behaviour over and over again.  We already know that if we could just have one, we would have just had one, and probably wouldn’t have to be on a diet

Without doubt, there are some people, or even some times in our life when we can just have one, and wrap the rest up to have on another occasion.  But there are more times, when we manage to convince ourselves that if one doesn’t hurt, then another one wont hurt that much either, and that leads to the thought process that ‘if I eat them all now, then they wont tempt me anymore’.

Have you ever eaten something in a mindless sort of way – and then realised that you have eaten it all and didn’t even notice?

LighterLife CBT mindfulness groups are there so we can begin to recognise that this is behaviour we have been doing for years ……. and we then try to work out Why do we keep doing it?

Until we work out why we do it, it is very hard to stop doing it.  And finding out the why is a long way towards maintaining your weight loss long term.