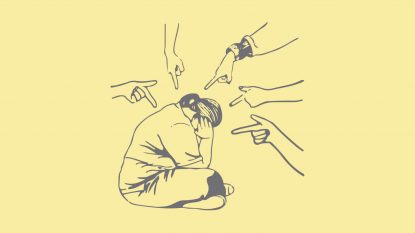 When US comedian and talk-show host Bill Maher called for fat-shaming “to make a comeback – some amount of shame is good”, James Cordon decided someone needed to say something about it, so he did. And his response has gone viral, with 4.3 million views to date..

“Fat shaming never went anywhere. Ask any fat person. We are reminded of it all the time. Now there’s a common and insulting misconception that fat people are stupid and lazy, and we’re not. We get it – we know being overweight isn’t good for us, and I’ve struggled my entire life trying to manage my weight,” he says.

“We’re not all as lucky as Bill Maher. We don’t all have a sense of superiority that burns 35,000 Calories a day. Fat shaming only does one thing; it makes people feel ashamed. And shame leads to depression, anxiety and self-destructive behaviour – like overeating.

“Fat-shaming is just bulling. And bullying only makes the problem worse.”

It’s not the first time fat-shaming has hit the headlines this year. When Cancer UK launched a campaign based on research showing that if you lose weight, you reduce your risk of cancer, they were widely called out for it. But there’s a world of difference between explaining scientific evidence and making people with obesity feel wrong.

As the old saying goes, if you’ve never walked a mile in my shoes how can you tell me about it? And as James Corden so heartfeltedly stresses, being fat, being overweight or obese is not a comfortable pair of shoes.

First, there is the physical. Carrying just three stone (which makes you obese), never mind six or ten extra stone, is like spending all day carrying a child. Everyday things – getting in and out of a car, walking upstairs, going to the gym or sitting in a chair – are hard work. Your back aches, your legs ache, your feet hurt, and your thighs rub together until they are red raw and bleeding.

Then there is the emotional – hating the fact that you are fat, while repeatedly trying and failing to lose weight. Fat is a barrier; it keeps others at a distance and is a safety blanket to keep yourself hidden.

But it also acts to attract hate. Being picked on, stared at, laughed at, blamed and made fun of on national TV by comedians chasing ratings; that’s being fat-shamed.

Thirty years ago, people who used alcohol to deal with life were told to “just drink less” – we now know they do not have a thirst issue, and that they need support and emotional help.

If you are using food to deal with life, taking away the substance without dealing with the life issues is not a solution. Making the assumption that all a fat person has to do is be shamed into showing some discipline to get them to “just eat less” shows that society still does do not have understanding.

Until we realise that fat people do not have a hunger issue and that they need emotional help, we should all be shamed.